For every pour of a premium beer, there’s a story of the brewing technology that brought it about.

This is especially true for Empire Brewing Company, an award-winning brewery that pioneered the brew-pub and craft brewery business in New York State some 22 years ago and that has enjoyed greatly renewed success with their recently opened farm brewery in Cazenovia, NY.

For this latest brewery (est. 2016), the brewing technology needed to be first- class and, if possible, locally sourced.

So, when it came to grain mills, tanks and fermentation vessels, Empire chose a highly-respected local supplier.

And when it came to beer ingredients, only the freshest, locally grown grains – some harvested on-site – would do.

But when it came to process heat – i.e., choosing a boiler for producing steam used for sanitation, sterilization and, most importantly, for heating brew kettles filled with water and malted grains used to make beer – Empire chose Fulton Steam Solutions of Pulaski, NY. 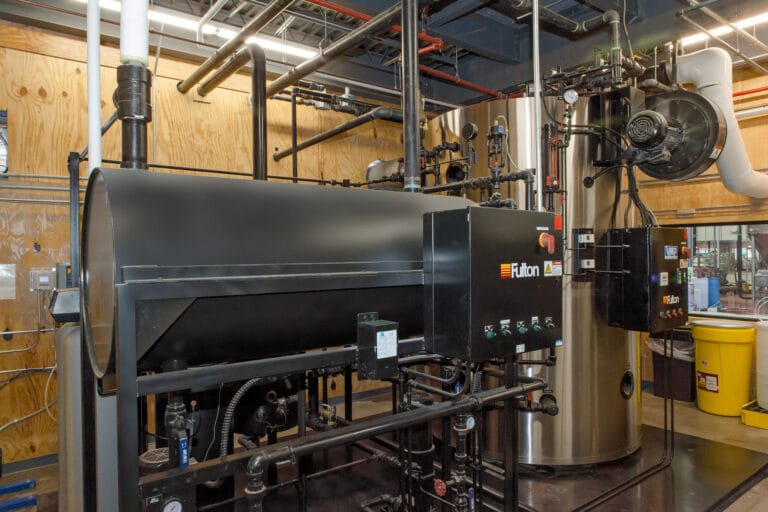 View within Empire farm brewery's boiler room of additional Fulton boiler accessories delivered as part of a a fully-engineered, skid-mounted system that was custom designed to meet Empire's needs.

From Grain to Bottle: A Brewhouse is Born

Because Empire had never built a brewery from the ground up, it was impossible at the outset for them to really be able to compare boiler quality or service. So, Empire began asking around the brewing industry for boiler recommendations a full three years prior to opening its doors.

And it wasn’t long before they had their answer.

“Fulton Boiler was quickly brought up as one of the industry leaders,” says Nick Irvine, Operations Manager at Empire.

“We were for a time working with several brewhouse manufacturers, almost all of whom spoke very highly of Fulton’s products and technical expertise.”

Empire also researched other boiler manufacturers but, once they found out about Fulton, they stayed with Fulton the entire time because, as Nick says, “your quality reputation in the industry, your years in business and, once we met you guys, the relationship we developed.”

Fulton was quickly brought up as one of the industry leaders.

An additional reason for choosing Fulton was Empire’s 20-year policy to buy local as much as possible.

“In any large-scale project like this,” said Nick, “you end up looking at equipment from all over the world . . . but to discover that a company with so great a reputation was right around the corner from us was news to us and was very exciting.”

“And once we got to know Modular Comfort Systems (local sales rep for Fulton), it made a lot of sense that we partner with both Fulton and Modular, being that they are both neighbors, and trying to keep those dollars in New York State.”

Piping that connects the brewhouse (background) to equipment used in later phases of the beer production cycle such as fermentation and sanitation vessels (foreground).

Consequently, Nick and Empire’s Director of Brewing Operations, Tim Butler, became concerned over how accurately they would be able to dial in their strike water temperatures – a concern that evolved into its own separate project within the brewery’s development phase.

“Inconsistent temperatures of water as you strike it with the grain can cause astringent flavors in the final product,” explained Nick.

“But the brewers at Empire quickly said that they were dialing in this new system really, really well and getting a great and consistent product.

“So, right out of the gate,” added Nick, “we saw that this boiler was exactly what we needed; it was sized perfectly, and it was making our brewer’s job a lot easier.

In light of consumers demanding more transparency in wanting to know not just where their food comes from but how it is prepared, Empire installed a window into the boiler room from the production floor (shown above) so that people can see more of the total life cycle of the beer they produce.

“We pride ourselves on keeping that room clean and organized and worthy of customer attention,” said Nick. “Knowing that this would be a showpiece for Fulton, the window was installed to allow folks coming through on a tour to look right in and see the nice stainless steel side of the boiler as well as the boiler room itself.”

Once Empire was up and running, they received on-going preventive maintenance training from Fulton personnel who, says Nick, “have been extremely helpful in educating us on the boiler itself and what we can do to add to its longevity.”

“A case in point,” says Nick, “is that after about six months of operating Fulton’s boiler, my guy on the ground here, Mike Hollenberger, the guy that’s really operating this thing daily, reached out to a Fulton employee for help.

“Fulton’s response to him was immediate and tremendous, as was Fulton’s willingness to come on-site and train, teach and explain things in great detail.

“And to have that kind of a response directly from the manufacturer, not just from the service company – to have that added level of support from Fulton – has been very, very comforting to us.

“Service after sale is a big thing in this industry, and there is no reason to think that we would ever consider any company other than Fulton just based on that alone.

“And on top of that, Fulton’s got great quality and a great product. You guys have been great to deal with directly.”

Service after sale is a big thing in this industry, and there is no reason to think that we would ever consider any company other than Fulton just based on that alone . . . You guys have been great to deal with directly.”