The Prosperity Company, established in 1915, was the leading manufacturer of commercial laundry and dry-cleaning equipment in the Central New York Region for most of the 20th century.

But when Prosperity’s VP of Sales, Fred Sauerbrey, and fellow company executive, Lester Kienzle, was nearing retirement, they chose to start their own company – one that dry cleans clothes.

This company was meant to be a showplace for potential clients to see the presses and other equipment that Prosperity was manufacturing at the time.

It was named DeWitt Cleaners, after the eastern suburb of Syracuse, NY, in which it is located. It opened in 1948.

In 1954, Fred Sauerbrey hired his son-in-law, Terrence Foran Sr., to oversee the business, with Terrence’s eldest son, Kevin, taking over in 1979, and Kevin’s sister, Debbie Diederich, joining in 1995 to run front-end operations. 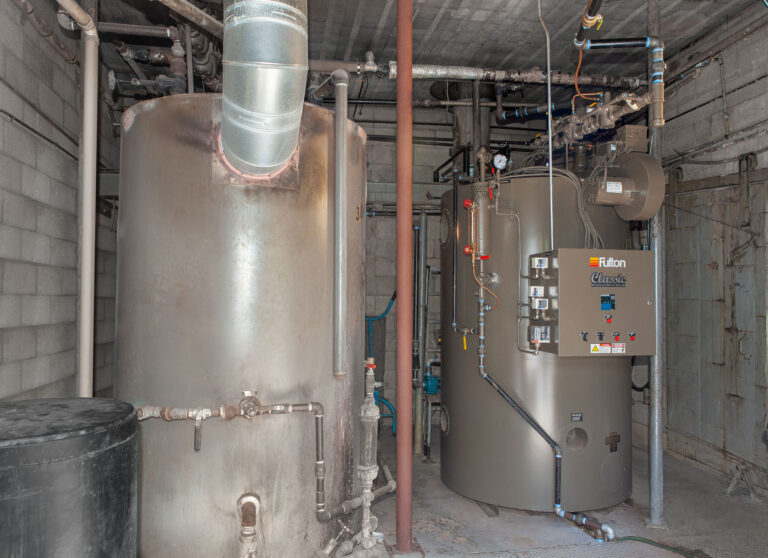 Almost all equipment at DeWitt Cleaners is steam-powered: pants- and shirt- pressing machines, irons, dry-cleaning stills using the steam for distillation, and dryers that use it for their drying cycles.

So, for DeWitt Cleaners, the boiler is the heart of their business.

Without the boiler running, and at high efficiency, the business suffers. The steam boiler is the starting point of getting production done. When boiler problems start, everything else ceases.

Said Kevin, “The Fulton boiler has always given us good service. And if you injure it, it’s fixable, just like so much of the other equipment I have here that was first installed in 1948.”

Continuing, “I’m on my third shirt- pressing machine since 1988. That’s $38-40,000 dollars for each replacement. And we’re on our third washer-extractor, which is $20,000. But the presses are all still working—every single one of them. And I expect that the Fulton boiler will be good for a long time yet to come.”

The Fulton boiler has always given us good service. And if you injure it, it's fixable . . .

Fulton vs. the Competition

The 28-year old Fulton boiler has been the dependable workhorse for DeWitt Cleaners. But in 2015, when DeWitt needed a second Fulton boiler as a backup, they couldn’t get one because they were in such high demand. So they installed a competitor’s instead.

They then decided to run the competitor’s new boiler as the primary boiler, with the existing Fulton boiler as a backup. “Worse decision I’ve made since I’ve been employed here, without question. I was totally sold a bill of goods. All smoke and mirrors,” says Kevin.

The competitor’s boiler started leaking on the tube sheet, which was actually at the top of the refractory wall. This meant that Kevin would have to turn the boiler upside down and cut the bottom out of it to x it, which was too expensive to even consider.

So Kevin, in 2018, went back to Fulton and purchased what he wanted in the first place: a new Fulton 50-HP Classic. It was installed right next to the 60-HP Classic, which Kevin had switched back in as the primary steam provider after the competitor’s boiler failed.

And the competitor’s boiler? Kevin got rid of that boiler, but he’s still dealing with the insurance company, the boiler company, and the equipment company that sold it to him. He’s trying to get someone to take responsibility for having to junk it after only three years of use. 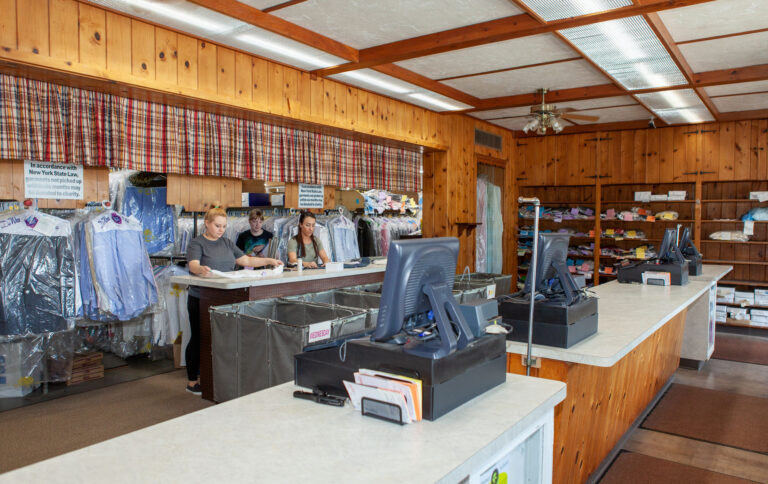 Customer area of DeWitt Cleaners through which many millions of articles of clothing have passed since 1948.

The ruggedness and durability of the Fulton boiler are exemplary. As Kevin said, “I can open it [the Fulton] up and it can have a scale in it or other issues, but you can x it, and you can continue to do business. It’s not made to be thrown away. That’s what I like about the Fulton.”

The size of the Fulton Classic boiler was also a key selling feature, as Kevin had limited space for where he installed his new backup boiler. He purchased a second Fulton Classic because he needed to stay with the Classic’s compact, vertical down- red design.

The compact design of the Fulton Classic also allows Kevin easy access for maintenance and servicing. Kevin wanted a boiler that’s easy to work on if needed; and a horizontal design would not allow him enough room to do this.

The quality of boiler steam at DeWitt for pressing also needed to be really high, especially for the special fabrics and finishes that they clean—the silks and linens—and because it has to travel quite a distance from the boiler due to the length of piping.

“The quality of the steam is something that a dry-cleaning plant should just expect to be there, but it isn’t always,” says Kevin. And when it isn’t, he says he can readily see the difference, especially on his utility presses.

“Fulton steam quality has been very good. With the other brand [competitor], I had all kinds of return problems with water in the lines. I rebuilt more steam traps in the first two years that I had that boiler than the previous 30 years with the Fulton,” commented Kevin. 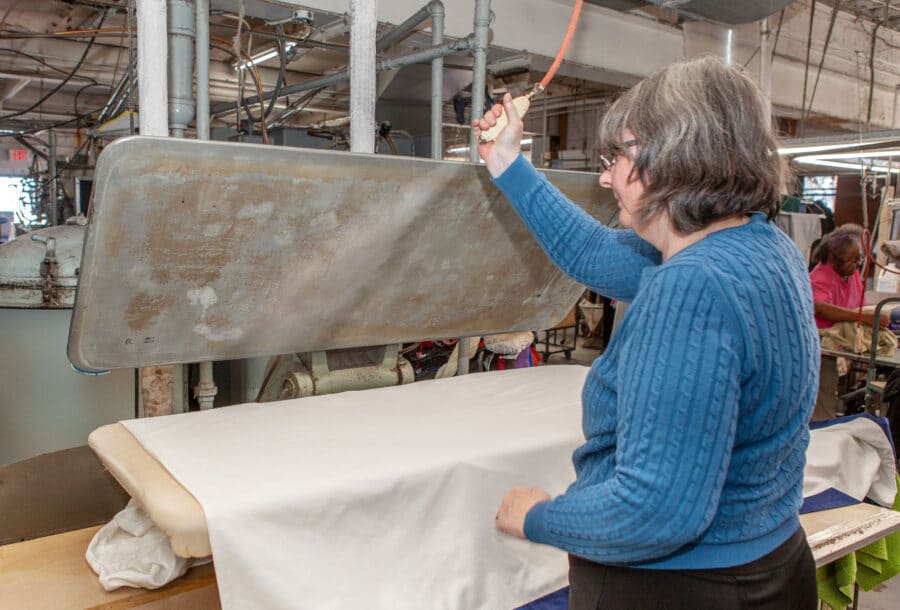 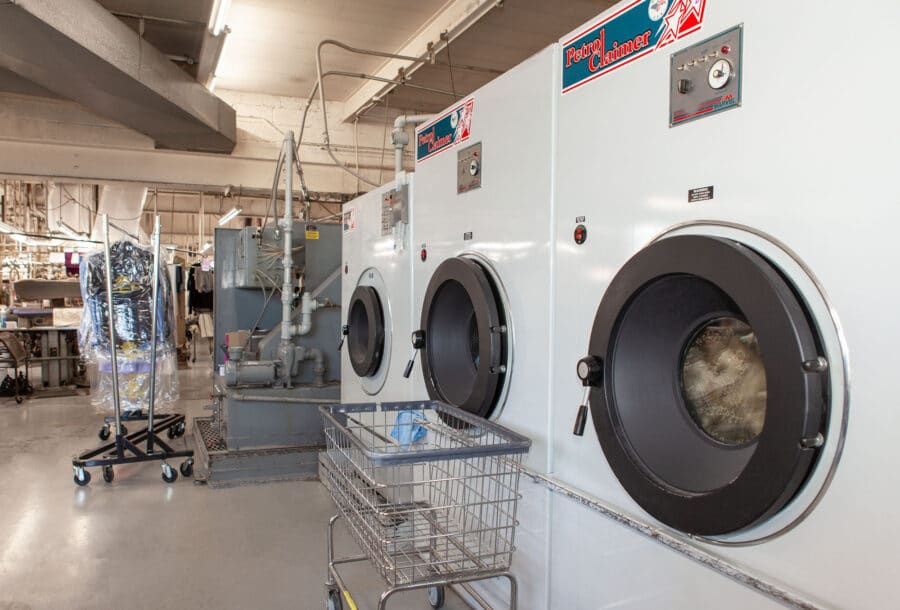 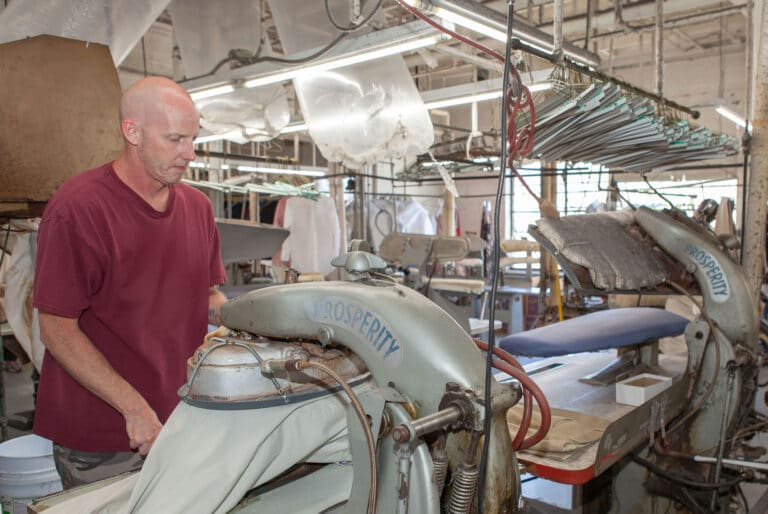 In Praise of Quality

When Kevin came into the business in 1979, his grandfather had already passed away, but his grandfather’s partner, an engineer by trade, was able to show Kevin how the equipment was put together and how it works.

That’s why much of the equipment at DeWitt is the original equipment, and why the Prosperity presses (above) are still running: Kevin can take them apart and reassemble them again.

“We still have the Prosperity presses here in the dry-cleaning department that were installed day one [1948], which is why I go crazy when I have to throw away boilers that are only three or four years old,” said Kevin.

Maintaining steam pressure is also very important at DeWitt. They want to be able to pump 3,000 gallons of solvent an hour if they need to. So, rather than using half-inch lines on their dry-cleaning equipment, they use inch-and-a-half.

They need 80 psi of steam for most of their equipment, though some of their re-claimers (equipment that filters solvents for re-use) are throttled back to around 40 psi.

“I have no problems maintaining steam pressure with the Fulton boiler,” said Kevin. “As long the boiler has water in it, it’s pretty consistent.”