Along the Appalachian Trail next to Harriman State Park in the Hudson Valley Region of New York State lies the Town of Monroe, home to KJ Poultry, the largest kosher poultry plant on the Eastern Seaboard.

With a staff of over 250 employees, KJ is committed to delivering the highest quality, all-natural poultry products, the success of which is proven by their loyal customer base and steady expansion of sales throughout the United States.

In the Fall of 2016, they added a deli plant that produces ready-to-eat meat products, including frankfurters.

The heart of this new plant—and critical to the quality of the food processed there—is precision, clean steam provided by their Fulton 30-HP ClassicTM steam boiler.

Said Meni Bruk, Plant Manager at KJ Poultry, “The Fulton boiler is used in our deli plant, a new operation that processes the chicken and turkey that we use for hot dogs, salami, bologna, turkey rolls, and other deli items of all kinds.” 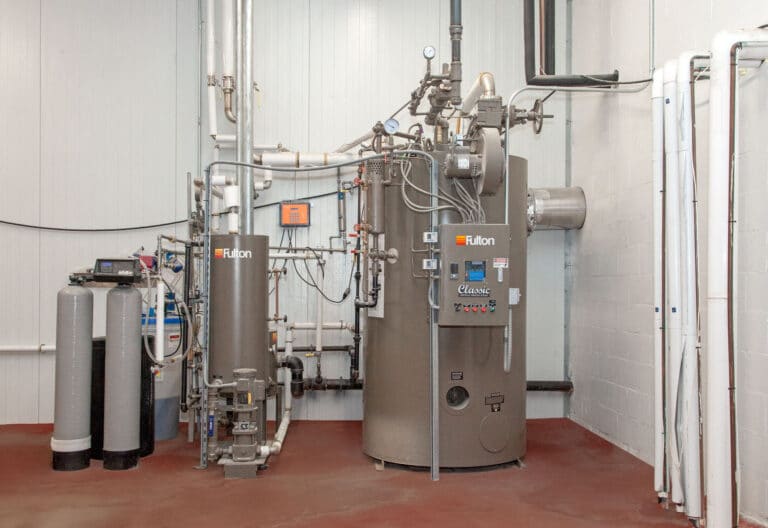 KJ's boiler room features a Fulton Classic boiler and accessories delivered as part of a a fully- engineered system that provides "clean steam" in as small a footprint as possible.

“We bought a Fulton because we wanted the best,” said Meni. “We asked around, and people pointed us to Fulton.”

Tom Cunningham at Applied Technologies of NY was the local sales rep who assisted with the Fulton boiler equipment KJ purchased; he highlighted its time-proven efficiency, quality, and rugged durability. Gar eld Plumbing and Heating was the rm that installed it.

A major reason for purchasing the Fulton boiler was its compact, space-saving vertical design. The issue was not so much space where it was installed, but the space required to t it through hallways and onto an elevator to get it to the second floor. This was a critical, limiting factor.

As Motty Walter, plumbing and installation engineer and manager at Garfield Plumbing, said: “The decision was between Fulton and a competitor of theirs, but Fulton easily won out due to the space savings it afforded by being vertical rather than the competitor’s, which was horizontal. Also, the exhaust stack of the Fulton boiler was much easier to vent.”

The purpose of this equipment is to keep the boiler water within the specified limits required to maintain steam quality and efficiency while reducing boiler maintenance. 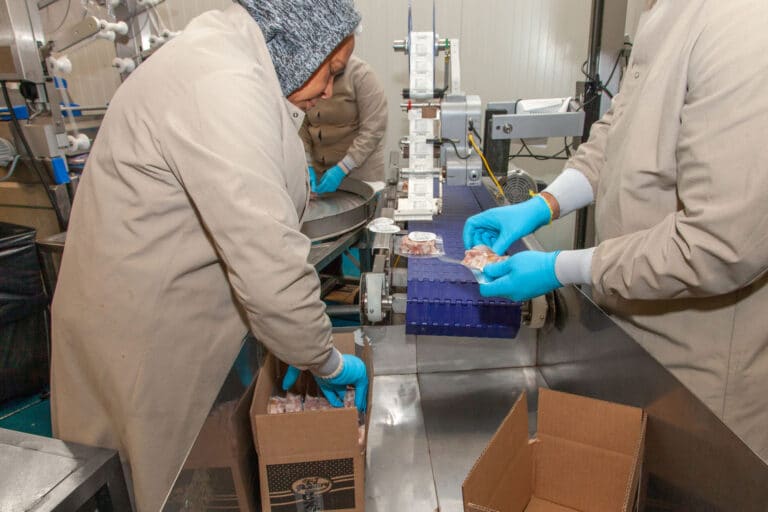 Steam that is Consistent and Pure

Fulton’s Classic boiler, with the versatility to meet an array of steam applications, is set to run at around 25 psi. The consistency of this pressure and the temperature of the steam provided by Fulton is critical to properly cooking the food that KJ prepares.

The steam also needs to be as clean as it can be; otherwise, it can affect the quality of the finished product. KJ personnel continuously test their food for bacteria and other contaminants to make sure this purity is maintained.

“Having a consistent and dependable heat source is critical to what we do; otherwise, the deli plant is shut down, plain and simple,” said Meni. “I’d have nothing to cook or pack.”

We bought a Fulton because we wanted the best...We asked around, and people pointed us to Fulton." 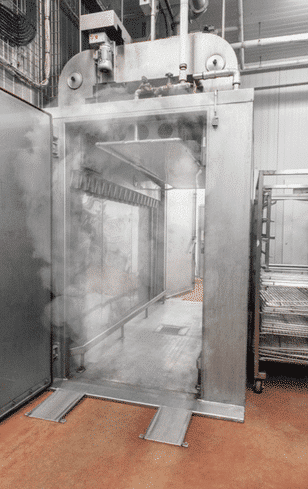 Boiler steam produced for food processing is typically forced into heat exchangers to provide indirect heating to food. But at KJ, boiler steam directly contacts food within cooking chambers such as the one shown above.

This means that the steam has to be of a very high grade in order to prevent contamination, further underscoring KJ’s reliance on the quality of the steam produced by Fulton’s Classic boiler.

As Meni says, “Many other steam-to-food operations work through heat extensions and the like, where steam never really touches the product; but in our operation, the live steam touches the finished product, so it needs to be pure.”

Though KJ’s sales are big in New York State—and biggest in Brooklyn, NY, which has a large Jewish community— they are increasingly selling to communities all around the country.

It used to be just the kosher communities, but the word has gotten out that they sell a very high-quality product, so it’s more and more popular everywhere.

And Fulton boiler steam is used to cook, process, and package all of the deli foods that they provide.

“The Fulton boiler is critical to our operations,” says Meni. “It has done a very good job for us.”

Fulton Boiler Works is an American company headquartered in Pulaski, NY. Backed by over 65 years of research, innovation and experience, Fulton designs and manufactures heat transfer equipment for a wide range of commercial and industrial applications.